👑 Welcoming His Majesty King Charles III! 👑
CLICK HERE to SAVE with our COUPON!
Use coupon CharlesIII* to save 5% on any order!
*Enter this code during checkout, valid through 2022/09/30.
FREE SHIPPING
available at $89
World Stamps & Collections /
World Stamp Packets /
Countries in M
Back 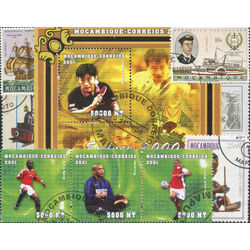 Mozambique is a country in southeastern Africa bordered by the Indian Ocean, Tanzania and Zimbabwe. Originally inhabited and ruled by indigenous tribes, Mozambique became a Portuguese colony in the 16th century. The country gained independence in 1975. It is a country with a tropical climate that produces foods common to the tropics-coconuts, pineapples, cashews and sugarcane. Mozambique suffered a civil war that left behind thousands of land mines. Today, dogs and rats are trained to sniff them out. Stamps were issued as early as 1876 while under Portuguese rule, but the modern postal history of Mozambique begins the same year as its independence-1975.