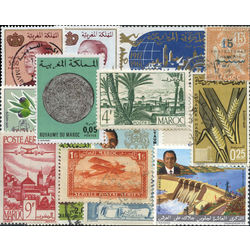 Morocco is a country in North Africa and part of a region commonly referred to as the Maghreb. Ruled by sultans, Morocco was one of the first countries to support the United States during the American Revolution by granting American merchant ships safe passage on the Atlantic. Morocco came under French control in the early 20th century but gained independence in 1956. That same year marks the beginning of its postal history as a self ruled nation. Morocco has long held a reputation as a land of mystery and intrigue and is considered by many as an exotic tourist destination. Get a taste of this country influenced by European, Muslim and African cultures by visiting the souk, touring Casablanca and savoring numerous delicacies!