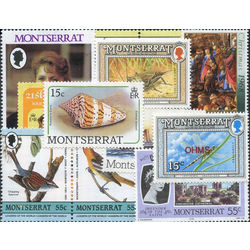 Montserrat is part of a chain of islands in the Caribbean. The island was discovered and named by Christopher Columbus on his second voyage to the New World. He called it Montserrat because its rugged terrain reminded him of the appearance of the mountain of Montserrat in Barcelona (meaning jagged mountain in Spanish). Though named by Columbus, the island came under British control and is still a British overseas territory. Life has been difficult on Montserrat due to the presence of active volcanos. An eruption in 1995 buried the capital of the island in mud, leaving habitation almost impossible. Today, the population of Montserrat continues to live in close watch of future eruptions. The postal history of Montserrat begins in 1876.