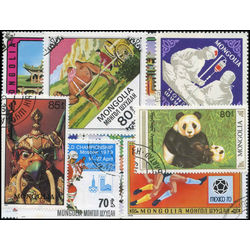 Mongolia is landlocked nation on the continent of Asia, bordered by Russia and China. Mongolia used stamps from Russia as early as 1858, but began issuing its own stamps in 1924. One of history's most famous warriors, Genghis Khan, was instrumental in forming the Mongol Empire. A popular subject in literature and film, Genghis Khan is considered to have been a masterful leader, as well as a brutal and violent conqueror. Mongolia is home to over 20 ethnic tribes and is one of the last true nomadic societies on our planet. An interesting tidbit: the first dinosaur egg was found in Mongolia.