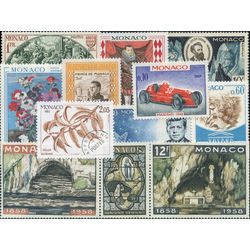 Monaco is a tiny nation located in southwestern Europe on the Mediterranean Sea. It is the second smallest country in the world. It is ruled by a constitutional monarchy, with the royal family of Grimaldi at its head. Monaco came to the attention of the world when the famous American actress Grace Kelly wed Prince Rainier III. Monaco is well known as a playground for the rich and famous, one of the hosts of Formula One racing, and as a tax haven for Europeans who live there but work outside of the country. Monaco began issuing stamps as a self-ruling principality in 1885.