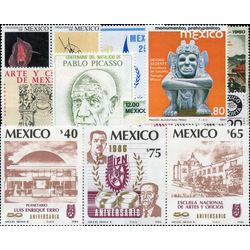 Mexico is a Spanish speaking country in North America located south of the United States. Mexico is a popular tourist destination and famous for its music and cuisine (we owe it the discovery of chocolate). It is home to many ancient marvels and its culture is a fascinating and vibrant blend of pre-Hispanic and Spanish roots.This country also has an interesting philatelic history. Its postal system is thought to have begun with the Aztecs, who developed a system of messengers which was later adopted by the Spanish conquerors. The modern postal history of Mexico begins in 1856. These stamps were issued with district overprints in order to inhibit the theft of stamps.