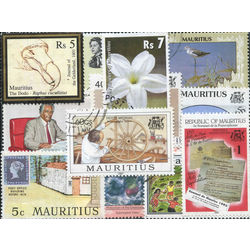 Mauritius is an island republic off of the southeastern coast of Africa. Before independence, Mauritius was under British control. Here's a fun fact: the island was home to the dodo bird before it became extinct. The postal history of Mauritius begins in 1847. Two of the most famous and valuable stamps in the world were the first stamps issued by Mauritius: the Red Penny and Blue Penny. They are extremely rare (only 26 are thought to still exist) and in 1993, a cover bearing both stamps was sold for $4 million-the highest price ever paid for a single philatelic item.