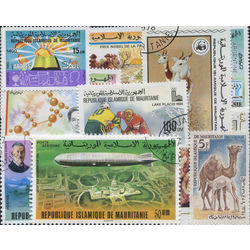 Mauritania is a country in the Maghreb, a region of western northern Africa. In fact, Maghreb means west in Arabic. Today, it is mostly a desert country and severe drought over the last few decades has been making the desert expand even more. Most of its inhabitants survive by agriculture and livestock farming. In centuries past, Mauritania had trade connections with Europe because of its production of gum arabic. This gum, harvested from the acacia tree, is used in everything from food to makeup and inks to glue. Mauritania has issued stamps depending on the ruler of the day. Here are a few dates: Mauritania (French Colony 1906-1944); Mauritania (1960-to the present).