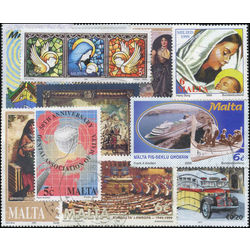 Malta is an archipelago in the middle of the Mediterranean Sea to the south of Sicily. Over the years its location has given it strategic importance and many nations have sought to rule it. Despite these conquering nations, Malta gained independence in 1964. These beautiful islands are a popular tourist destination. It has many heritage sights to offer the traveller, as well as beautiful collections of paintings by such classic artists as Caravaggio. It has been dubbed the Mediterranean Hollywood since many feature films are shot on location there. A few examples: Troy, Gladiator and The Count of Monte Cristo. Stamps began being issued in 1860.