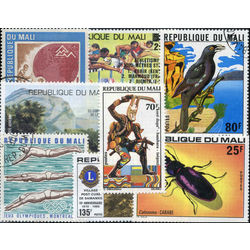 Mali is a landlocked country in Western Africa, roughly located in between Niger and Senegal. Much of the northern part country is in the Sahara desert, with most of its inhabitants living in the southern regions. Though it was once a rich and powerful nation trading in gold, salt and slaves, Mali is now one of the poorest nations on the earth. Most of its population only makes $1.25 USD a day. An interesting tidbit; the famed city of Timbuktu is located in Mali. The Republic of Mali gained independence in 1960, though stamps began being issued in 1959.