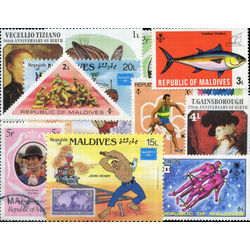 The Maldive Islands, also known as the pearls of the Indian Ocean, are an archipelago of 26 atolls (groups of coral reef islands in a ring) southwest of Sri Lanka. It is thought that they were originally settled by fisherman from Sri Lanka. They eventually became a British protectorate, but gained independence in 1965. The country is now officially known as the Maldives. Geographically, the Maldives are the lowest nation in the world, being on average 4 feet above sea level. Many food items must be imported, but magroves and coconut palms grow on the islands. The Maldives has a large variety of fish species in its waters. The economy of the inhabitants of the Maldives therefore relies heavily on fishing and tourism. The Maldive Islands began issuing stamps in 1906.