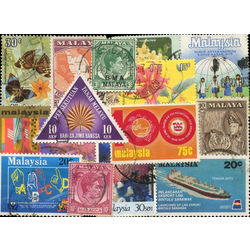 Malaysia is a country made up of 13 states and 3 territories located in southern Asia. Formerly a British colony, Malaysia gained independence in 1957, but the country as we know it today was officially united in 1963. Stamps of Malaysia began being issued in 1957 and all states produce their own stamps. Malaysia is a multi-ethnic country and one of the largest producers of palm oil in the world. The country is also known for its biodiversity. It has been estimated that Malaysia is home to 20% of the world's animal species. It is also home to multiple plant species; one of the most intriguing is the flower of the Rallesia family. These five petalled flowers are said to be the largest in the world, some attaining a diameter of 1 metre. They are also one of the smelliest; the flowers give off the smell of rotting flesh in order to attract the flies and insects which pollinate it. Hence, its popular nickname of meat flower. Malaysia issued a set of 14 definitive stamps featuring the rafflesia flower in 1979.