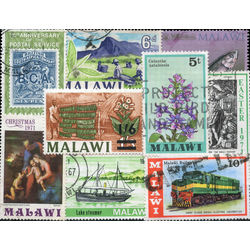 Malawi is a landlocked country in southeast Africa. It was colonized by the British and remained under British control until 1964. The territory was considered Nyasaland from 1907-1964. Malawi is largely an agricultural society with many tribes involved in basket and mask carving. Malawi is a country with diverse landscapes, a warm tropical climate and a friendly, welcoming population.The year of its independence also marks the beginning of its postal history.