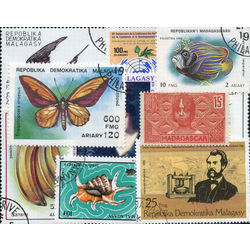 Madagascar is an island in the Indian Ocean off the coast of the African country of Mozambique. It is home to diverse plant and animal species, with many being native to that specific area. Unfortunately, human activity has led to a significant decrease in the forest area and certain species of animals. Madagascar is a leading exporter of spices, coffee, and vanilla. While Madagascar was a British Colony, stamps began being issued in 1884. In 1885, it became a French protectorate and then a colony in 1896. The official name of Madagascar changed several times according to the reigning government, until finally becoming the Republic of Madagascar in 1993.