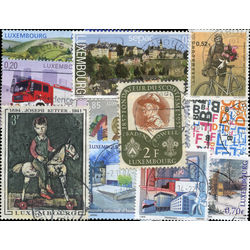 Luxembourg is a landlocked country located within Western Europe near Germany, Belgium and France. It is a small country with a population of the less than half a million people. Luxembourg was invaded by Germany during both World Wars and joined the Allies in fighting the Nazis. The country's inhabitants have a Celtic, French and German mixed ethnicity. It began issuing its stamps in 1852.