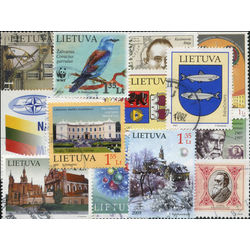 Lithuania is a country Northern Europe along the shore of the Baltic Sea. Its postal service goes back to ancient times, but the first modern Lithuanian postage stamps were issued in 1918. When the Soviets occupied the area, Soviet stamps were used, but after gaining their independence in 1990, Lithuanian stamps were once more issued.