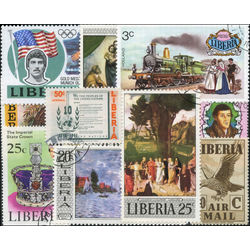 Liberia is a country on the west coast of Africa. It has a special history; the area was an American colony and used as the land where former slaves of the United States were allowed to return to their home continent with the promise of greater freedom and equality. The abolition movement in the late 1800's was drawing greater support and many approved of this action, especially since it meant not having to live in the same nation as emancipated slaves. Individuals who returned to Africa and settled in the colony were known as Americo-Liberians; they declared the country's independence in 1847. Unfortunately, settling in an area where there were 16 other ethnic groups already lived didn't really contribute to a peaceful start for the country. The first stamps of Liberia were issued in 1860.