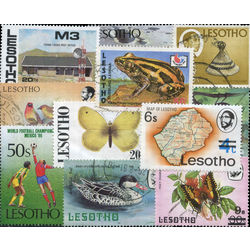 Lesotho is a landlocked country within South Africa. Once known as Basutoland, it gained its independence in 1966 and was renamed Lesotho. The capital city is Maseru. Lesotho is known as the Kingdom in the Sky for its lofty altitude. It has the highest lowest point of any country in the world at 1400m and is in fact the only country to be entirely above 1000m! A postal system has been in use for at least 129 years, but it began issuing stamps as Lesotho in 1966.