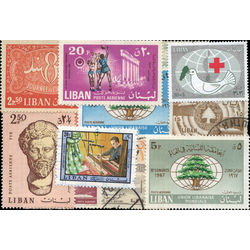 Lebanon is a country in Western Asia bordered by Syria and Israel. It has a civilization going back over 7000 years. Formerly a part of the Ottoman Empire, after World War I Lebanon was controlled by the French. Its autonomy was granted in 1927 and full independence achieved in 1941. It is a country well known for its civil war and the fragility of its politics. On a more positive note, it also has a highly recognized cuisine and culture due to the large number of Lebanese who have emigrated to other countries. Stamps began being issued in 1924.