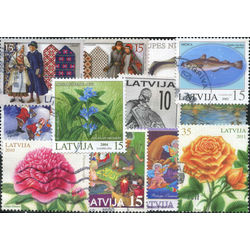 Latvia is a country in the Baltics bordered by Estonia and Lithuania. Latvia was made a sovereign state following World War I and was admitted to the League of Nations in 1922. It came under Soviet control in 1944 and remained as such until 1991. That year introduced the end of the USSR's hold over the region. Stamps which have been issued by Latvia are therefore divided into two eras: from 1918-1940, and 1991 to the present.