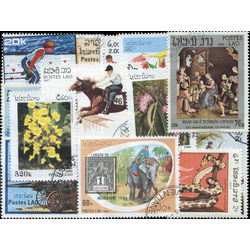 Laos is a landlocked country in Southeast Asia nestled among China, Burma, Vietnam, Cambodia and Thailand. The country is officially known as the Lao People's Democratic Republic. Once a part of French Indochina, Laos gained full independence in 1949 and was known as the Kingdom of Laos. In 1975, the country came under Communist power. The correct pronunciation of the country's name in the native tongue is Lao and not Laos. The French were the first to spell the name with an S. From 1951-58, the first stamps were issued inscribed Union Française Royaume du Lao. After that they were inscribed Royaume du Laos, until 1975. After 1975, stamps were changed to read République Démocratique Populaire Lao. Now they are inscribed Postes Lao.