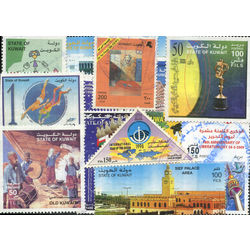 The postal service of Kuwait goes all the way back to the days when the East India Trading Company established an overland camel postal service. Kuwait and its postal officewas subsequently administered by several countries, such as India, Pakistan and finally Britain. Overprinted stamps from each administration were used. Kuwait gained its independence from Great Britain in 1961, and issued new stamps inscribed with its new national currency, the dinar.