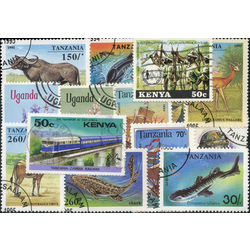 Kenya-Uganda-Tanganyika stamps were issued between 1935-1961 by the East African Post and Telecommunications Administration. When the two states of Zanzibar and Tanganyika merged to form one nation in 1964, the region was renamed Tanzania, and the stamps were issued as Kenya-Uganda-Tanzania. These stamps continued to be issued as such until 1976. This stamp packet contains stamps inscribed with the three names, as well as individual stamps issued by each of these now independent East African countries.