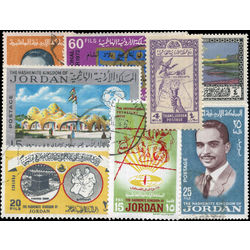 Jordan is a country in Western Asia bordered by Syria and Saudi Arabia. Once a part of the Ottoman Empire, at the end of World War I borders were redrawn, and the area known as Jordan was mandated to the British. After World War II, the United Nations approved an end to their rule and Jordan became an independent state in 1946. Jordan has a reputation as having a high standard of living compared to other countries of the Middle East. It boasts an ancient civilization and many historical locations. The ancient, rock cut city of Petra is one of UNESCO's World Heritage Sites, and has been used as a location in films such as Indiana Jones. The first stamps of Jordan were issued in 1920.