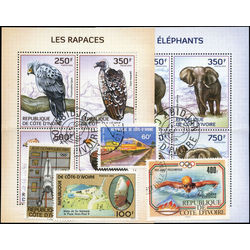 Ivory Coast, or Republic of Côte d'Ivoire, is a country in western Africa. The area was a part of French West Africa until it was named an autonomous region in 1958. It gained independence in 1960. It was an economically prosperous area, known for its exports of coffee and cocoa. It began issuing stamps in 1959.