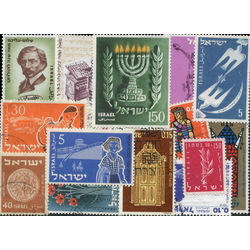 Israel is a nation in Western Asia bordering Lebanon, Syria, Jordan and Egypt. While the nation of Israel is mentioned in the Bible, the modern State of Israel was only established in 1948. The partition of Palestine, by the United Nations, into a Jewish state had immediate political repercussions, with Arab states attacking Israel the day after it announced its independence. War has continued off and on every since. Israel began issuing stamps as an independent state in 1948.