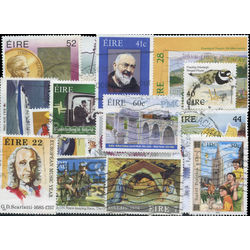 Ireland is an island near Great Britian. It is divided into the Republic of Ireland, which is a sovereign state, and Northern Ireland, which remains part of the United Kingdom. The Republic holds the greater area of the island. Ireland is known for its lush, green and hilly landscape. Images of Celtic ruins, leprechauns, Guinness beer and Irish whiskey spring to mind. The Irish have greatly contributed to the world of music, art and poetry. Unfortunately, the island has also known hard times, from the Great Famine, where one million of its population died, to the modern day Troubles mainly concentrated in Northern Ireland. The first stamps of the Republic were issued in 1922, while the first stamps of Northern Ireland were issued in 1958.