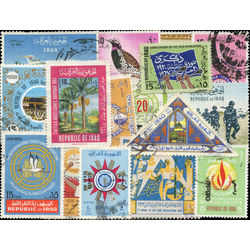 Iraq is a republic located in Western Asia near Iran, Kuwait and Saudi Arabia. Its ancient civilization was known as Mesopotamia, meaning Land between the rivers, those rivers being the Tigris and Euphrates respectively. Ancient Mesopotamia is considered the cradle of civilization and birthplace of the wheel and or writing. While modern Iraq and its controversial politics and regimes have been a source of contention to many nations, the world owes the establishment of the first legal and judicial system to the country's ancestors. The first stamps of Iraq were issued in 1923.