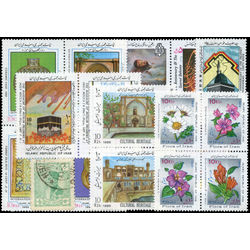 Iran is a country in Western Asia which is an Islamic Republic. It has great power on the world stage due to its petroleum and natural gas reserves as well as its burgeoning nuclear industry. It has an ancient civilization going back to 7000 BC. Once known as Persia, its culture has contributed greatly to astronomy, mathematics, art and architecture. In modern times, Iran used to be ruled by a Shah (King) until a revolution in 1978 overthrew him and introduced the rule of Ayatollah Khomeini, Supreme Leader of the nation. Recent elections have put in place a president with a Supreme Leader still maintaining great power. The postal history of Iran begins in 1935.