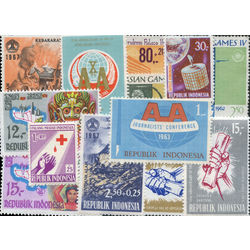 The Republic of Indonesia is an archipelago in Southeast Asia. It is a predominantly Muslim country, although there are numerous ethnicities present. It has a diverse geography and wildlife. Its location makes it subject to many volcanoes and earthquakes, some of which have been devastating to the population. Indonesia attracted the attention of colonizing nations because of its spices, specifically nutmeg. The Dutch ruled for several decades until Indonesia gained independence in 1949. The postal history of Indonesia begins in 1945.