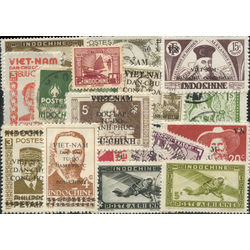 The term Indochina refers to the region is Southeast Asia which was colonized by the French. French. Indochina was made up of the areas now known as Cambodia, Laos, and Vietnam. The postal history of the region begins in 1889 and lasts until 1949. In the beginning, stamps of the French Colonies were used and overprinted with various inscriptions. Then, in 1889, they began being inscribed "Indo-Chine". In 1892, regular stamps were issued also inscribed Indo-Chine.