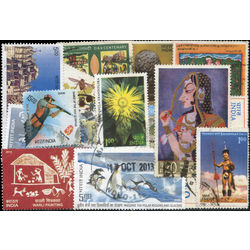 This packet contains only large commemorative stamps. India is a country in South Asia near Pakistan, China and Nepal. It is well known for its ancient history, vibrant culture, cuisine, and rising power on the world stage. Mail service in India goes back to pre-colonial days. However, when India became a British colony, its postal system became more like the West. Early on stamps were required for prepayment of mail, but they were circular was stamps pressed onto paper. Eventually the wax seals were replaced by embossed paper. These early postage stamps are considered very rare and have a value that can go up to $97, 000. The first modern stamps such as we know them were issued in 1854. Independent India issued its first stamps in 1947. India's rich philatelic history is now displayed in the National Philatelic Museum of India.