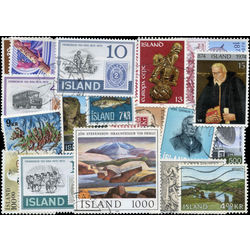 Iceland is an island country situated in the North Atlantic Ocean. Its landscape is mainly plateaus, mountains and glaciers. The first inhabitants are reputed to have been Irish, since a genetic study of Icelanders revealed Irish descent, but there is no archaeological proof of this. The first recorded settler was a Norwegian chieftain. In the past, Iceland has been under both Norwegian and Danish control, but it is now an independent republic. Iceland has struggled economically, and up to the 20th century was mainly rural. Iceland's postal history begins with a mail service established in 1776, and the first stamps issued in 1873.