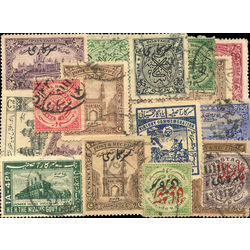 Hyderabad was once a state in the British Indian Empire in Central India. It was under British rule until 1948, the year the British Raj ended and the region joined the Union of India. In modern times, Hyderabad is a district and city in the Indian state of Andhra Pradesh. Its name means City of Pearls. Its postal history dates from 1869 until 1948.