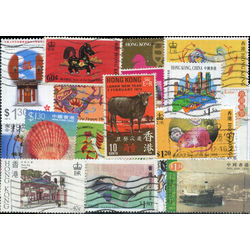 Hong Kong is a territory made up of islands and some mainland which has belonged to the People's Republic of China since June 30th, 1997. Previously however, Hong Kong used to be a British crown colony. The Brits had a 99 year lease on the region beginning in 1898. Though now officially under Chinese rule, Hong Kong remains distinct from mainland China in many areas of its life and its government. It is a renowned financial and urban center and is one of the most densely populated areas in the world. While under British rule, Hong Kong issued stamps with the inscription Hong Kong and the face of the reigning monarch. They are now inscribed Hong Kong, China. The first Hong Kong stamps were issued in 1862.