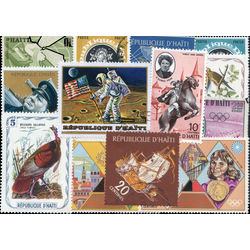 Haiti is a Caribbean country which occupies one-third of the island of Hispaniola, alongside the Dominican Republic. Once inhabited by Amerindians, Haiti eventually came under the control of the Spanish and later the French. Its native population tried to fight against European occupation, but to no avail. Haiti is a noteworthy nation for many reasons: at one point, a woman, Queen Anacoana, led the resistance against European colonization. Also, Haiti was the first nation to gain independence as a result of a successful Black slave revolt, and it is the first post-colonial nation to gain independence and be led by a Black government. French is the official language; however, its inhabitants also speak Haitian Creole. Despite gaining independence from the gold-hungry Spaniards in 1804, Haiti has had a long and complicated political history, rife with corruption. It is one of the poorest nations in the world. Haiti began issuing its own stamps in 1881 when it joined the Universal Postal Union.