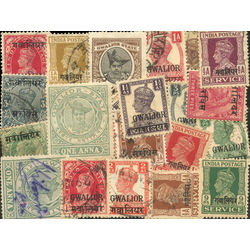 Gwalior was once a kingdom in India named after one of its most important cities. Throughout its history, it was under the authority of various Indian dynasties, but it became Gwalior State under British rule. Stamps of British India were overprinted with the name "Gwalior" in Hindi, or English, or both, and supplied to the state for use. After India obtained independence, stamps of Gwalior were no longer valid. Stamps were issued from 1885-1948.