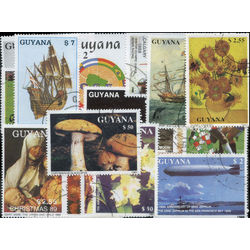 Guyana is on the northern coast of South America, and is part of the Commonwealth of Nations. The Dutch first settled the area, followed by the British who assumed control in the 1800's, naming the area British Guiana. Guyana gained independence from Britain in 1966, and began issuing its own stamps in that year. Guyana is a beautiful country covered by forests and with a high diversity of living creatures, both flora and fauna. It has many protected areas and keeps trying to obtain UNESCO World Heritage status for some of its sites.