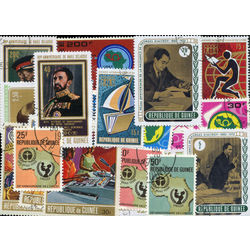 The Republic of Guinea is a country in western Africa near Senegal, Guinea-Bissau and with its western border along the coast of the Atlantic Ocean. Originally a French colony, when given the choice by France to secede, Guinea opted for independence and obtained it in 1958. Guinea is a country rich in minerals, gold, diamonds, and possibly oil. Though not the poorest nation in Africa, corruption and difficulty in establishing projects keeps the population below the poverty line. Guinea began issuing its own stamps in 1959.