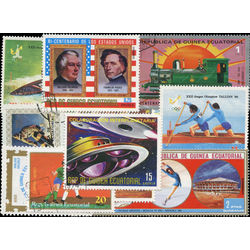 Equatorial Guinea is one of the smallest countries in Central Africa. It includes the region formerly known as Fernando Poo. The first known settlers of the area are the pygmies, although now very few remain. The Spanish gained control of the country and made it a colony in 1900. Equatorial Guinea eventually gained independence from Spain, but its political system has been corrupt, bloody and violent from the very beginning. Despite an increase in government revenue due to the discovery of oil fields, the population is one of the poorest in the world. Stamps of Equatorial Guinea began being issued in 1974.