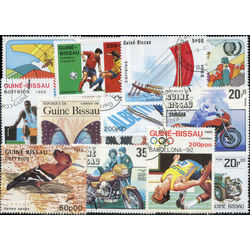 Guinea Bissau is a small country in western Africa in between Senegal and Guinea. Once a Portuguese colony, Portuguese Guinea Bissau was known as being a part of the Slave Coast due its high traffic in human lives. European settlements were mainly concentrated along the coast since the native Africans fought to prevent the Europeans from settling farther inland. Once the Portuguese were ousted, the Republic of Guinea Bissau was formed. Despite independence, civil war has continued off and on until the present day. Guinea Bissau began issuing its own stamps when it gained independence in 1974