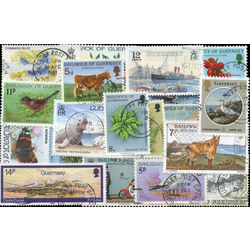 Guernsey is a small island in the English Channel off the coast of Normandy. It is a British Crown Dependency, which means that while it is not technically a part of the United Kingdom, the UK is responsible for its defence. Also, even though it is independently administered, since it is a Crown possession it cannot be considered a sovereign nation. It was during WW2 that Guernsey began issuing its own stamps, specifically, in 1941. While it was under German occupation, its stock of British stamps ran out and it began producing its own and has continued to do so ever since. Traditional British post office boxes can be seen throughout the island, though they are painted blue. Guernsey stamps are recognized as some of the most beautiful in the world and have featured numerous topics.