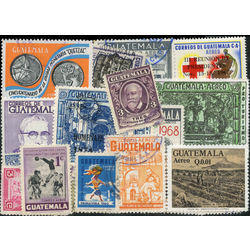 Guatemala is a country in Central America which borders Mexico and Honduras. It has had a long and tumultuous political history beginning with the Spanish conquest in the 1500's. Guatemala's indigenous peoples have long been victimized by colonizing forces, right up to our modern times. Throughout the years, death squads, genocide and a poor record of human rights have plagued the country. Despite its troubles, Guatemala has a rich heritage and culture, and has worked towards increased stability. Stamps began being issued in Guatemala in 1871.