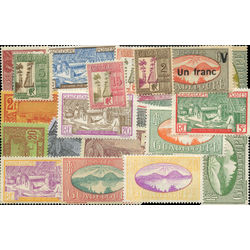 Guadeloupe is a group of islands in the eastern Caribbean Sea. The first European to land in Guadeloupe was Christopher Columbus in 1493, although nobody from the ship stayed on the island. It is said that he also discovered the pineapple on Guadeloupe. Originally settled by Carib Indians, European settlers fought for control of the island until it became a part of France. Guadeloupe issued stamps from 1884-1947, but now it uses French stamps.