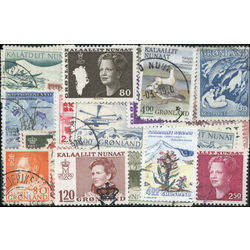 Greenland is an island nation located in between the Arctic and Atlantic Oceans. Geographically closer to North America, Greenland has been under the rule of Denmark since the 1700's. Denmark granted Greenland home rule in 1979, but the Queen of Denmark remains its head of state. The first stamps of Greenland were issued in 1938. Only during WW2 was there a change in stamp issuance. Since Greenland was cut off from Denmark and didn't have enough stamp stock to last them to the end of the war, the United States issued a set of stamps. This American Issue was the cause of a great controversy when some of the stamps went missing and never reached Greenland, and all of a sudden, so-called varieties began appearing in the collectors market.