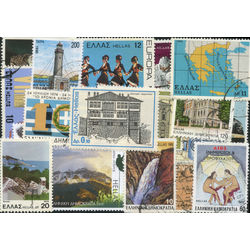 Greece is a country in south Eastern Europe near the Aegean Sea which also includes several islands. Greece is well known for its ancient civilization and mythology, as well as being the birthplace of democracy and famous philosophers. Greece has a lot to offer tourists as well, from stunning vistas to blue seas, archaeological sites and fresh cuisine. Greece had a postal service as far back as 1828, but issued its first stamps in 1861. They featured a profile of the Greek god Hermes; appropriate, since he is the messenger god. Greece was also one of the founding members of the Universal Postal Union. Members of this international union agree to respect universal standards for international post.