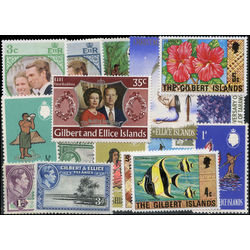 Gilbert and Dependencies, otherwise known as Gilbert and Ellice Islands became a British protectorate beginning in 1892 and then a British colony from 1916 to 1976. Stamps from Gilbert and Dependencies were issued from 1911 until 1975, during which time a regular postal service was established for the islands. Before that date, mail was delivered only when a passing ship happened to be going by the islands. In 1976, inhabitants of Ellice Islands voted for independence and were granted it in 1978, becoming the nation of Tuvalu. In 1979, Gilbert Colony became the nation of Kiribati.