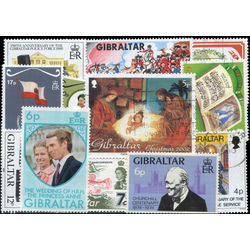 Gibraltar is a small territory at the tip of Spain jutting out into the Strait of Gibraltar. It is a British overseas territory with Queen Elizabeth as its head of state with a governor as her representative and an elected parliament running the country. While the UK has nothing to do with governmental affairs, it is responsible for defence and foreign relations. Famous for its geographical feature The Rock, Gibraltar is a popular tourist destination. Beginning in 1886 Gibraltar issued its own stamps bearing its name. The postal service is known as the Royal Gibraltar Post Office.