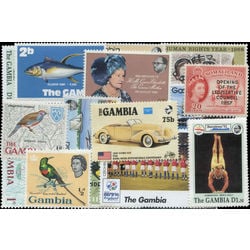 Once a British colony, Gambia is a tiny nation in West Africa whose border follows both sides of the Gambia River. It was once one of the centers of the slave trade, and the setting for the famous novel Roots. Officially known as the Republic of The Gambia, it gained independence from the British in 1965. Despite its relative political stability, it is country well below the international poverty line and with a poor record of human rights. Postage stamps began being issued in 1869 and featured a cameo head of Queen Victoria. Many stamps have been issued throughout the years with African themes although in modern times popular American themes have also been used as stamp designs.