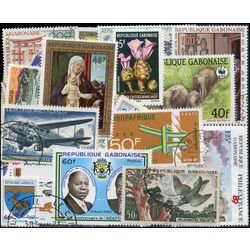 Gabon is a country in West Africa near Cameroon and the Republic of Congo. Gabon was once a French colony but gained independence in 1958. The postal history of Gabon goes all the way back to 1862 with the establishment of a post office in the capital city of Libreville. Gabon issued its own stamps under French authority overprinted with the initials GAB. Later inscriptions followed with finally Afrique Équatoriale being used. Even after independence Gabon continued to use stamps of French Equatorial Africa, but in 1959 Gabon issued its first postage stamps as a republic.